If you've read this blog for 10 minutes, it's pretty clear that B spoils me rotten.  However, every once in a while, something happens to his brain.  About 18 years ago, despite having my 90 pound, pound puppy Ruff Ruff (Yes.  He really was from the pound, some thick lab/shepherd mix, named by a 4 year old.) in the back yard, I told Bent that it would be super awesome if we got an inside puppy.  He looked at me....and said...."No!"  What the????  Not, "Okay, baby.  We'll see."  Or, "Really, sweetie?  Well, we'll think about it."  He. Said. NO!!!!!!!!!!!!!  Well!!!!  I didn't speak to him for days.  But, then, on a cold, rainy November morning in 2000, B brings me a cup of coffee in bed (What a jerk!!  Right????) and says, "There's a puppy outside."  I think my response was something like, "Kiss my ass!"  He just looked at me sadly and said, "No.  Really.  There's a puppy outside."  Feeling that I am being tricked somehow...I looked out the front door.  Sure enough.  There was a beagle-esq, shivering, pup. Foot pads, cut and bloody.  Skinny.  Trying to stay under the eave, out of the rain.  Well.  In about two seconds, he was cuddled up in my robe. Scrubbed free of his fleas and such.  And welcomed INSIDE!  A new puppy (somewhere between 6 and 16 months per the vet) named....KARMA!  B's. Not mine.  He was the sweetest.  Never peed or pooped in the house (until recently).  LOOOOVED the kids.  Would run and bite Fred on the bootie on command.  Would lie like a contented snoring unconscious thing on his pillow. THEN! You see that the toast or chicken or cake is eaten - the shoe is destroyed - the potted plant is UN and dirt is every where!  You look back!  The Karm is still snoring on his pillow!  HOW did this happen????  He would look at you sweetly and say, "Wasn't me!"  He was my worst trained dog ever.  He never "came" or "heeled".  But, he never barked.  He LOOOOVED Ruff Ruff and later Zeno. He wanted so much to run with the big dogs.  The only noise he ever made was to yoddle happily when on a walk with all his peeps and the big dog!  On meeting him, Ruff looked up at me and said, "Really, mom?  We have to keep him?  I could do away with this THING in a single bite?!"  My Ruff WAS well trained and believed me when I said, "Yes.  He needs a home." 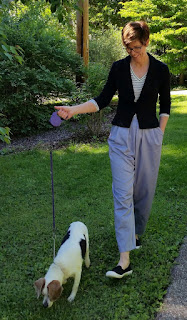 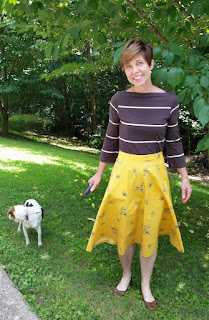 The past year was tricky for Karm.  He lost his hearing and vision.  It didn't really slow him down.  We adjusted.  We didn't let him go too far afield on his leash so that he wouldn't crash into something.  He knew his way around the house on his own.  He liked nothing better than sitting on his pillow between both our feet, as we sat on the couch and talked or watched TV.  However, over the past two weeks eating and walking were not things he was really able to do.  He remained sweet and docile to the end.  You were one of a kind, dear Karm.  Thanks for wandering into our lives.  Thanks for all the laughs.  Thanks for being my pillow when I felt unwell with my treatments.  Pups.  Family.  We will all miss your sweetness.  - les
Posted by Les at 9:14 PM