Our microbiome has been getting lots of attention and legit research in regard to health generally, as well as cancer and response to cancer therapies (immunotherapy specifically) recently.  Here's a link to lots of reports:  Cooties!

And given that data and the importance of the right cooties being present in our gut, it makes sense that antibiotics would certainly throw a wrench in that balance.  Here's a link to some related posts:  Antibiotics, gut microbes, and decreased response to immunotherapy  It is interesting to note that years ago, doxycycline was found to be one of the things that killed melanoma:   Doxycycline kills melanoma - at least in a petri dish

Gut dysbiosis impairs response to immune checkpoint inhibitors (ICIs) and can be caused by broad-spectrum antibiotic (ATB) therapy.  To evaluate whether there is an association between ATB therapy administered concurrently (cATB) or prior (pATB) to ICI therapy and overall survival (OS) and treatment response to ICI therapy in patients with cancer treated with ICIs in routine clinical practice.

Overall survival calculated from the time of ICI therapy commencement and radiologic response to ICI treatment defined using the Response Evaluation Criteria in Solid Tumors, with disease refractory to ICI therapy defined as progressive disease 6 to 8 weeks after the first ICI dose without evidence of pseudoprogression.

Among 196 patients (137 men and 59 women; median [range] age, 68 [27-93] years) with non-small cell lung cancer (n = 119), melanoma (n = 38), and other tumor types (n = 39), pATB therapy, but not cATB therapy, was associated with worse OS (2 vs 26 months for pATB therapy vs no pATB therapy, respectively) and a higher likelihood of primary disease refractory to ICI therapy (21 of 26 [81%] vs 66 of 151 [44%]). Overall survival in patients with non-small cell lung cancer (2.5 vs 26 months), melanoma (3.9 vs 14 months), and other tumor types was consistently worse in those who received pATBs vs those who did not. Multivariate analyses confirmed that pATB therapy and response to ICI therapy  were associated with OS independent of tumor site, disease burden, and performance status.

Despite being limited by sample size, geographic origin, and the lack of correlative analyses on patients' gut microbiota, this study suggests that [prior] ATB therapy but not [concurrent] ATB therapy is associated with a worse treatment response and OS in unselected patients treated with ICIs in routine clinical practice. Mechanistic studies are urgently required to investigate ATB-mediated alterations of gut microbiota as a determinant of poorer outcome following ICI treatment.

Which discusses an article published in July and notes:  "The study, published Thursday in the journal Nature, found restricting intake of an amino acid found in red meat and eggs significantly enhanced cancer treatment in mice, slowing tumour growth."

So, eat those veggies and take antibiotics only when you really need them!!!!  (Not that either of those recommendations are news!)  For what it's worth! - c
Posted by Les at 4:46 PM No comments:


I cannot begin to find the words to describe all the sweet love and joy that was shared among so many over this weekend.  So, I will start with these two ~
We were blessed to share lots of love, laughs and tender moments as witnesses with Bryan and Martha at their legal ceremony in Ringgold!!!!

Brent and I (and ever so many others) wish them every joy and happiness.  Congratulations, Jamie and Rose!!!  Moore Love, indeed!!

Stay tuned!  Their celebration with family and friends, party pics and even MOORE love to come! ~ les
Posted by Les at 10:27 AM 2 comments:


Yep!  Baby girl gonna get herself hitched so we have been playing, celebrating, and having a great time generally!!!!

Beauty in every season.


I mentioned my Blackberry lilies and the seed pods they form that give them their name in my Fav Things post.  I thought you might like to see them!  Are they not exquisite???


From the moment I started seeing research about them, I've been a big fan of intralesional therapy ~  drugs injected directly into accessible melanoma tumors.  My Primer for Melanoma Treatment  contains a link that covers a great deal of what is known about them.  As I note there,

Intralesional drugs include (but are not limited to):CAVATAK - derived from the CoxsackievirusT-VEC - also called OncoVEX, Imlygic,  or Talimogene Laherparepvec - uses the herpes virus with GM-CSFPV-10 - derived from Rose BengalHF10 - also derived from HSVSD101 - a TLR9 agonistIL-2 -  is also being used

From earlier this year:  In-transit melanoma metastases and PV-10 vs isolated limb perfusion, an update...

There was this update in 2018:  Reports on Intralesionals for melanoma - T-VEC, SD-101, and Dendritic cells

And from this summer, there is this:

Systemic immunotherapy with PD-1 inhibitors is established in the treatment of metastatic melanoma. However, up to 60% of patients do not show long-term benefit from a PD-1 inhibitor monotherapy. Intralesional treatments with immunomodulatory agents such as the oncolytic herpes virus Talimogene Laherparepvec and interleukin-2 (IL-2) have been successfully used in patients with injectable metastases. Combination therapy of systemic and local immunotherapies is a promising treatment option in melanoma patients. We describe a case series of nine patients with metastatic melanoma and injectable lesions who developed progressive disease under a PD-1 inhibitor monotherapy. At the time of progressive disease, patients received intratumoral IL-2 treatment in addition to PD-1 inhibitor therapy. Three patients showed complete, three patients partial response and three patients progressive disease upon this combination therapy. IHC stainings were performed from metastases available at baseline (start of PD-1 inhibitor) and under combination therapy with IL-2. IHC results revealed a significant increase of CD4+ and CD8+ T cells and a higher PD-1 expression in the inflammatory infiltrate of the tumor microenvironment in metastases from patients with subsequent treatment response. All responding patients further showed a profound increase of the absolute eosinophil count (AEC) in the blood. Our case series supports the concept that patients with initial resistance to PD-1 inhibitor therapy and injectable lesions can profit from an additional intralesional IL-2 therapy which was well tolerated. Response to this therapy is accompanied by increase in AEC and a strong T cell-based inflammatory infiltrate.

These are drugs I would certainly try, especially in combination with immunotherapy, should I have the need.  For what it's worth. ~ c
Posted by Les at 10:28 AM No comments:

Sew Chaotically! ~ The Mariana Jacket on our 'first' fall day!!!


I made this little linen-ish jacket a bit ago, but since my neck of the TN woods has been as hot as hell's front porch, today was the first day cool enough to need it!  The fabric is a funky 100% cotton canvas abstract print from fabric.com while the pattern is the FREE Mariana - unlined, notched collar jacket replete with its own tutorial on The --- Thread, all from Fabrics-store.com.  They have quite a collection of free patterns!  Check them out! 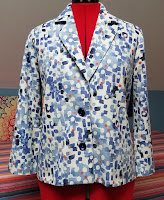 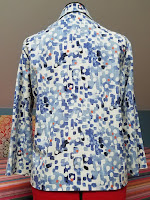 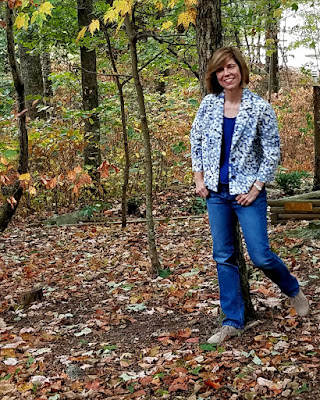 I think it turned out really well!  I'm already planning one for Roo and another for myself in a more neutral fabric.  Happy fall, y'all!!!  Live and sew chaotically! - les
Posted by Les at 10:38 PM 2 comments:


I've yelled for years that having a doctor (and institution) that is familiar with and provides lots of care to melanoma patients is ESSENTIAL in getting the best care for melanoma peeps.  It can mean the difference between life and death.  As such, I am often asked who and where these providers are.  So, I decided to create this post as a more accessible resource.  While by no means a complete list, it's a pretty darn good one!!!


Internationally renowned melanoma specialists include:
Jeffrey Weber - NYUhttps://nyulangone.org/doctors/1053348706/jeffrey-s-weber#
Anna Pavlick - NYUhttps://nyulangone.org/doctors/1255332839/anna-c-pavlick
Mario Sznol - Yale (CT)https://www.yalecancercenter.org/patient/people/mario_sznol.profile
Antonio Ribas - UCLA (LA)https://www.uclahealth.org/antoni-ribas
Stephen Hodi - Dana Farber Harvard  (MA)https://www.dana-farber.org/find-a-doctor/f-stephen-hodi/
Suzanne Topalian - John Hopkins (MD)https://www.hopkinsmedicine.org/profiles/results/directory/profile/00209...
Jason Luke - Hillman Cancer Center (PA)https://www.upmc.com/media/news/051519-jason-luke
Jedd Wolchok - MSK New Yorkhttps://www.mskcc.org/cancer-care/doctors/jedd-wolchok
Michael Postow - MSK (NY)https://www.mskcc.org/cancer-care/doctors/michael-postow
Sanjiv Agarwala - St. Lukes, PAhttps://health.usnews.com/doctors/sanjiv-agarwala-260302
Adil Daud - UCSF San Franciscohttp://cancer.ucsf.edu/people/profiles/daud_adil.3622
Robert Andtbacka - Huntsman - Utahhttps://healthcare.utah.edu/huntsmancancerinstitute/news/2018/04/huntsma...
Hussein Tawbi - MD Anderson - Texashttps://faculty.mdanderson.org/profiles/tawbi_hussein.html
Omid Hamid - LAhttps://bio.csmc.edu/view/6321/Omid-Hamid.aspx
Paolo Ascierto - Naples Italyhttps://www.esmo.org/Profiles/Paolo-A.-Ascierto
John Thompson and Georgina Long - Australia
https://www.melanoma.org.au/about-the-institute/our-team/
Those listed may be the lead melanoma physicians at their respective institutions, but seeking care from others in their groups allows for excellent care as well.  Furthermore, if travel is not something you can attain physically or financially, press your local oncologist to seek the opinion of these experts!!!  They can talk to these docs and attain advice on how to treat you over the phone!!!  YES!!!  It is something local docs can ask and expert docs can answer!!!  Many in this list attend and present lectures at cancer symposiums around the country and the world about the state of care in melanoma TO local oncologists!!  It is part of what they do.  It is a shame that you must push for such care while you or your loved one simultaneously deals with melanoma, but that is how it is.
Hope this helps.  Wishing you all my best! - c
Posted by Les at 10:45 AM No comments:


As a convenient follow-up to my September report Melanoma patients want to know! What do I choose? Targeted or immunotherapy? What happens then? in which I addressed the latest survival data for both targeted and immunotherapy, a report coming from some Melanoma Big Dogs on the 5 year OS of the ipi/nivo combo was just released.

Nivolumab plus ipilimumab or nivolumab alone resulted in longer progression-free and overall survival than ipilimumab alone in a trial involving patients with advanced melanoma. We now report 5-year outcomes in the trial.

So - the ASCO report broke various factors down a bit, but generally noted:  "overall post-treatment 1-, 2-, and 3-year OS rates were 74%, 65%, and 56%, respectively".  In this new report the OS at 5 years for the ipi/nivo combo = 52%, for nivo alone = 44%, and ipi alone = 26%.  Given what we have been seeing in the research these numbers are pretty consistent with expectations.  The ipi/nivo combo peeps didn't quite hold onto the 3 year survival number of 56%, the data point where those who are fond of kaplan meier curves note things flatten out, but it is pretty close.  I do want to reiterate from the ASCO report, "pts who discontinued due to study drug toxicity (n = 32), post-treatment 1-, 2-, and 3-year OS rates were 84%, 75%, and 65%, respectively.   I think it is reasonable to assume that while the 5 year OS in that group may well decrease a bit, that would still be a good number! (Considering we are talking melanoma world y'all!!!)

Pretty hopeful stuff when you consider that in 2010, NONE of the current therapies attaining these survival results for melanoma patients were FDA approved.  Not even ipi.  NOW!  Let's get some help for that other 50% of our melanoma peeps!!! - c
Posted by Les at 9:51 AM 2 comments: