Time to Response...Ipi vs Nivo and ipi 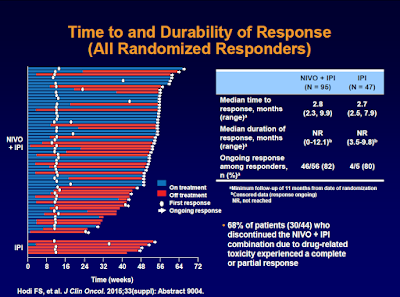 Sometimes a picture is worth a thousand words. This slide is from a paper comparing the nivo/ipi combo vs ipi alone by Hodi et al. 2015.  Median time to response for both is roughly three months (or approximately 10-12 weeks).  Duration of response in these patient is not yet reached.  Roughly 80% of those responding have an ongoing response in both groups.  68% of those who had to discontinue the combo had a complete or partial response.....a very good thing!!!  There are documented outliers who responded at anywhere from 6 to 10 months....just say'n!  Of course we have to remember that the percentage of responders for the combo is about 50-60% vs only 10-15% for ipi alone.